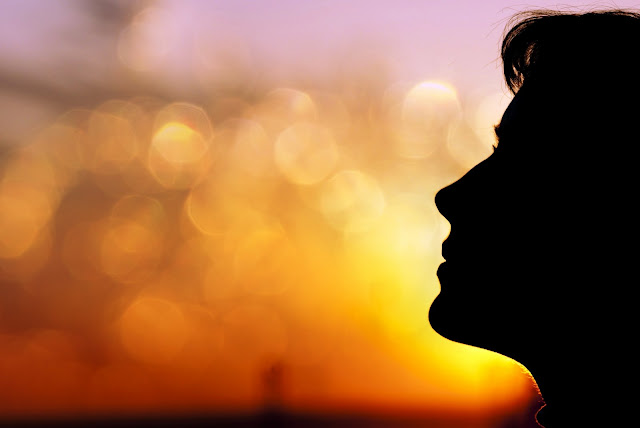 “A moment of danger can bring about a temporary cessation of the stream of thinking
and thus give you a taste of what it means to be present, alert, aware.”
~ Eckhart Tolle, ‘Stillness Speaks’ ~
As I came across this phrase last night, immediately, memories flashed through my mind of an episode which I had encountered about six months ago.
My husband and I had just arrived in a mall at the time. It was early and there were not many people around. We were in a hurry, heading towards a certain shop. Needless to say, my mind was filled with thoughts of what I was going to do when I reached my destination.
As we were crossing the main lobby of the mall where an exhibition was being held, I suddenly tripped over a bundle of wires which had been taped on the floor. As my body was flying in mid-air, all my thoughts came to a sudden halt.
I became very alert and aware of everything happening in that single moment. Things around me had turned hazy and was completely SILENT. Then, I heard a soft woman’s whisper in my right ear saying, “Break the fall!”
My mind was not able to think so fast so I just followed the instruction given to me. I raised my arms and placed them in front of me as my body landed heavily on the floor. I thought that was the end of it… but my body continued to slide forward on the polished marble floor for another second.
Then, everything stopped and the colourful world came back into focus. In a daze, I picked myself up, turned around and saw my husband still standing and looking in shock at the bundle of wires that had caused my fall. I was not hurt, just a slight knock and graze on my right knee.
There was no one around us at all. Who was that voice who gave me instructions from the depth of SILENCE? It could only be my guardian angel or the Godself within who is always guiding me and guarding me.
“You can hear the footsteps of God when silence reigns in the mind.”
~ Sri Sathya Sai Baba ~
Om Sai Ram… Be Happy Always!
Posted by adeline108 at 4:59 PM 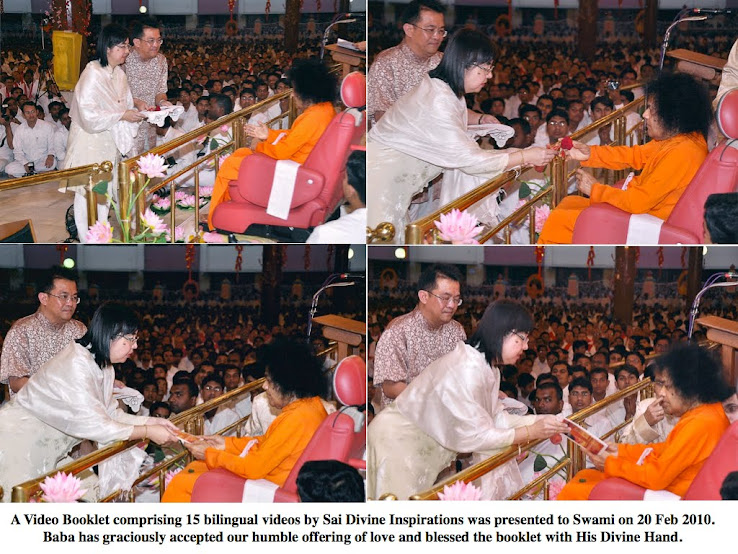 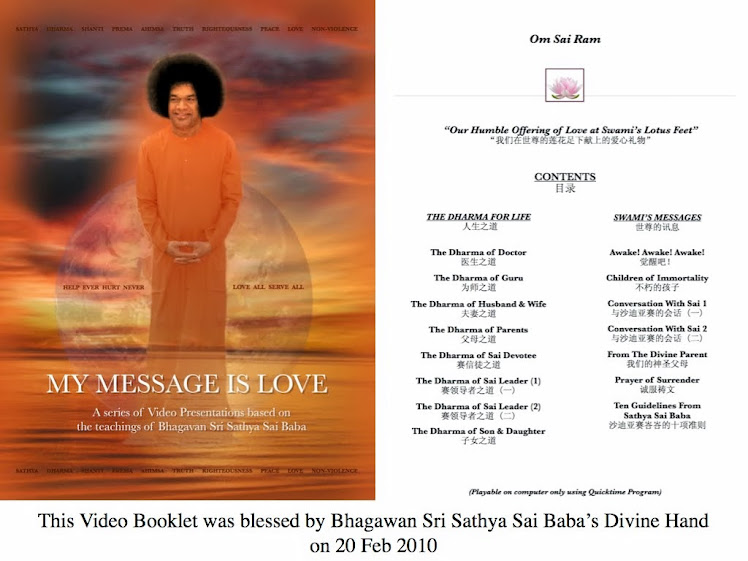 ***Click on the above picture to read my story on 'THE DAY I MET MY LORD, BHAGAVAN SRI SATHYA SAI BABA'

Baba & I 峇峇与我' - Interview with Sister Adeline Teh (Malaysia)

adeline108
Loving Sai Rams to everyone.... Welcome to our non-profit spiritual blog which celebrates the universal teachings of Bhagawan Sri Sathya Sai Baba in inspirational forms of art and literature.